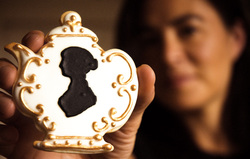 You'll often find that the term "Janeite" can be used as an insult or a compliment. I always take it as a compliment, no matter what the context the person actually intends. I think Wiki does a great job of defining the positive and negative connotation of the word, and thus use it here:

From Wikipedia, the free encyclopedia:
The term Janeite has been both embraced by devotees of the works of Jane Austen as well as used as a term of opprobrium. According to Austen scholar Claudia Johnson Janeitism is "the self-consciously idolatrous enthusiasm for 'Jane' and every detail relative to her".[1]

Janeitism did not begin until after the publication of J. E. Austen-Leigh's A Memoir of Jane Austen in 1870, when the literary elite felt that they had to separate their appreciation of Austen from that of the masses.[1] The term Janeite was originally coined by the literary scholar George Saintsbury in his 1894 introduction to a new edition of Pride and Prejudice.[2] As Austen scholar Deidre Lynch explains, "he meant to equip himself with a badge of honor he could jubilantly pin to his own lapel".[3] In the early twentieth century, Janeitism was "principally a male enthusiasm shared among publishers, professors, and literati".[4] Rudyard Kipling even published a short story entitled "Janeites" about a group of World War I soldiers who were fans of Austen's novels.[5]

During the 1930s and 1940s, when Austen's works were canonized and accepted within the academy, the term began to change meaning. It was used to signify those who appreciated Austen in the "wrong" way and the term, according to Lynch, is "now used almost exclusively about and against other people" [emphasis in original].[6]

Modern Janeites are often described in the same tones as Trekkies and are, according to Johnson, "derided and marginalized by dominant cultural institutions bent on legitimizing their own objects and protocols of expertise".[7] However, this may be changing as scholars such as Johnson and Lynch study "the ludic enthusiasm of [the] amateur reading clubs, whose 'performances' include teas, costume balls, games, readings, and dramatic representations, staged with a campy anglophilia in North America, and a brisker antiquarian meticulousness in England, and whose interests range from Austenian dramatizations, to fabrics, to genealogies, and to weekend study trips".[8] Lynch has described committed Janeites as members of a cult, comparing their travels to places Austen lived or places described in her novels or their adaptations as pilgrimages, for example. She argues that such activities provide "a kind of time-travel to the past, because they preserve an all but vanished Englishness or set of 'traditional' values....This may demonstrate the influence of a sentimental account of Austen's novels that presents them as means by which readers might go home again – to a comfortable, soothingly normal world."[9]